Google’s Answer to the Apple Watch Leaks in a Closer…

Don’t Worry. Bitcoin & Crypto May Be Down, But…

Chromebooks are growing up. When I first began reviewing them, Google’s Pixelbook was largely still the gold standard among Chrome OS-based devices that might appeal to working professionals (rather than younger students, as has been the primary Chromebook market for years on end). Just a short time ago, higher-end devices like the Pixelbook and Samsung’s Galaxy Chromebook were something of an anomaly.

But in the past couple years, a new class of Chromebooks has been trickling in. We’ve been seeing more expensive, better-built devices that focus on elements like screen and webcam quality at the expense of features like weight and battery life, which have traditionally been Chromebook staples. While HP’s $659 Chromebook x360 14c doesn’t quite occupy what I’d characterize as the premium tier, it still aims to be a primary work and productivity driver, equipped with Intel’s 11th Gen processors and HP’s signature stylish build.

Overall, I don’t think this is the best-value Chromebook in that group that you can buy. It’s a bit clunky, the keyboard and touchpad aren’t my favorite, the screen is glare central, and there are Chromebooks not too far off this price point that offer significantly more. But its standout features (the audio and webcam are both surprisingly good) will appeal to some. It’s a device I’m glad to see HP making and one I hope it will improve upon with future iterations. 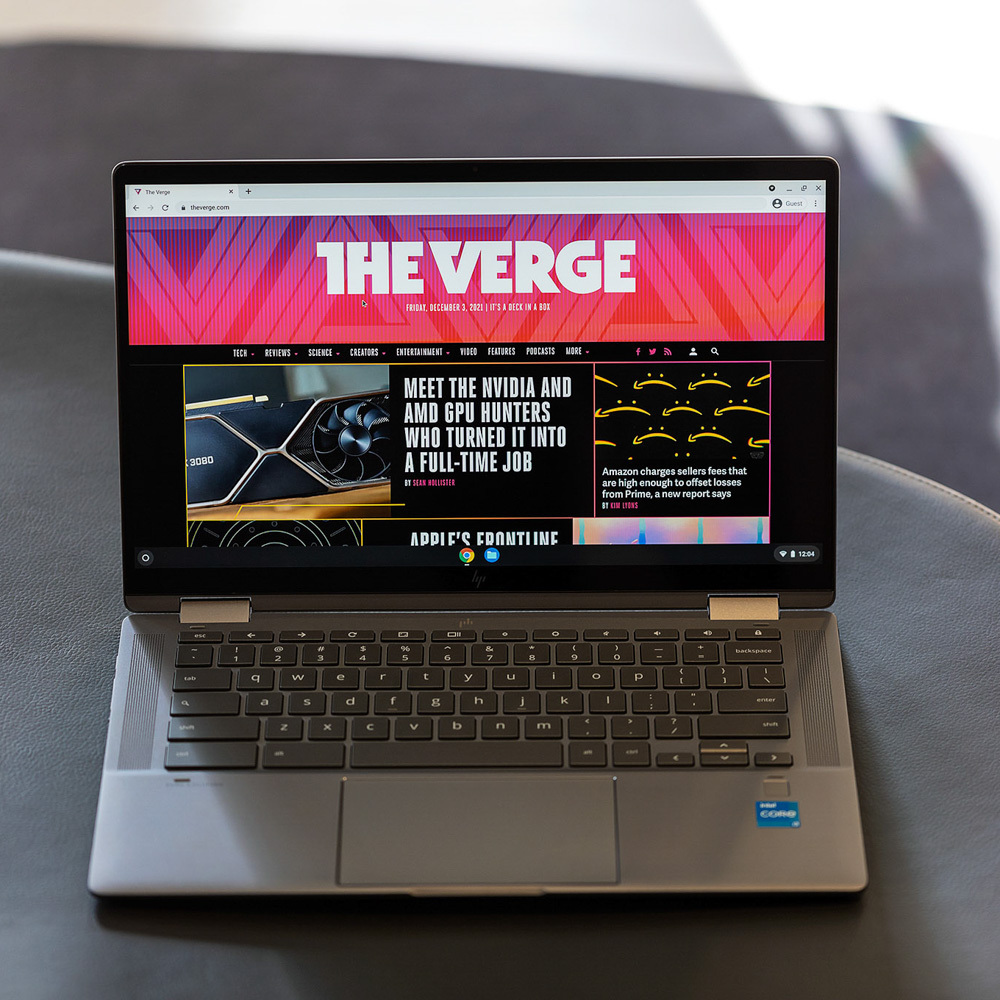 The 14c’s most unique draw is its build quality and design. This is a nice-looking and nice-feeling device. The accents and keyboard backlight are classy. The material doesn’t feel plasticky in the least. There’s little to no flex in the keyboard deck and screen (a rarity among Chromebooks at this price point) and no screen wobble that I observed. The lid did pick up some smudges, but these weren’t very visible unless I was really looking for them. (The fingerprint situation was much better than it is with, say, literally any dark MSI or Razer laptop.)

The chassis is 3.35 pounds and 0.71 inches thick. That does make it a bit of a clunker, and you can find thinner and much lighter fare at this price point. I will say, though, that the device feels more portable than those numbers imply. The rounded corners and sleek look make it feel fairly unobtrusive and chic.

It’s also a very solid video conferencing tool. People I zoomed with remarked that I sounded good through the 14c’s dual microphones. The webcam was also surprisingly good — probably one of the best webcams I’ve used on a laptop this year. It provided accurate colors, even in not-great lighting. You can turn it on and off with a tiny physical button on the right side of the chassis. While this isn’t quite a physical webcam shutter, it is nifty and easy to reach. Even the audio was clear, with audible harmonies and no distortion, though I wish it got a bit louder.

Those are the x360’s main benefits. Elsewhere, while there aren’t necessarily any major problems, I do have some mixed feelings. The touchpad, for example, is quite roomy and capable when it comes to palm rejection. But the sensitivity took some getting used to, and I never quite came around on it. It was so sensitive out of the box that I was having trouble navigating, but bumping the sensitivity down a notch made the cursor feel unusably slow. (I know I sound like a Goldilocks here, but this is not a problem I usually have with touchpads.) I had some skidding issues with the touchpad’s surface as well, which may have contributed. The keyboard is comfortable and nicely backlit but a bit slow and flat for my taste. I was a fair bit under my usual typing speeds.

The display is another area where I have mixed feelings. Colors and saturation were adequate — I didn’t have any problems with YouTube-watching and the like — and there’s stylus support. But this is still a 16:9 display, while many of our favorite Chromebooks have moved to taller displays with more room. The panel is also dim for this category, maxing out at just 250 nits. I was able to work indoors at medium brightness, but I had to deal with quite a bit of glare, and you might struggle to see the screen in brighter areas.

This is, by no means, the most powerful Chromebook you can buy (there are models out there with Core i5 processors for not too much more), but it blew through my pile of Chrome tabs and various apps, including Twitter, Messenger, and Gmail without issues. Zoom calls overtop all this, which can make some lesser-powered Chromebooks stumble, were a non-issue.

More impressively, the x360 14c did this with little heat and almost no fan noise. I actually wasn’t convinced this thing had a fan after a day or so of testing because I was running a fairly heavy load and really not hearing anything. When I put my ear very close to the bottom of the deck, though, I could hear consistent whirring and occasional whine.

Still, plenty of Chromebooks that house more powerful chips (including Acer’s Chromebook Spin 713) have constantly blazing fans. If you’re mostly working in Chrome (as I do), you shouldn’t need more powerful specs than this, and you shouldn’t need to worry about annoying fans throughout your day. If you’re running more intense programs, something like the Spin 713 will likely give you faster performance.

Battery life was also acceptable, though unexceptional for a Chromebook. I averaged six hours and 24 minutes of consistent work. That’s about an hour worse than what we saw from the Spin 713, and plenty of budget Windows laptops last longer. And it wasn’t the fastest charger, juicing up to just 55 percent in an hour of light Chrome use.

Final consideration: the Chromebook x360 14c runs Chrome OS, as other Chromebooks do. This operating system improves every time I test it and has reached a point in the past year or so where I almost never run into major problems. Some Android apps that were a disaster on this device (Messenger, for example) are now functional. Others (like Slack) have just been removed from the Play Store.

For someone like me who largely works in Chrome and doesn’t generally prefer Android apps, the experience isn’t much different from using Windows (especially since Microsoft has also moved all the icons to the center of the Windows 11 taskbar). The limiting factor for me is that there are still all kinds of programs you can’t run on Chrome OS without a bunch of extra work — I have to use Slack in my browser, for example, and I much prefer having the desktop client. And certain programs you might want to use, such as various members of the Adobe Creative Suite, don’t have browser equivalents at all.

The Chromebook x360 is a fine device, but it’s not the best one you can buy. For comparison, we can look to the Chromebook Spin 713, currently our top Chromebook pick. This device (there’s only one 11th Gen model) is currently going for $699 at Best Buy, about $40 more expensive than the x360’s MSRP and $160 more than its discounted price at the time of this writing. (I have seen the Spin 713 on sale for as low as $569 in the past.) That affordability is most of the advantage the 14c has over the 713 — Acer’s device gives you a gorgeous, much higher-resolution, brighter, glare-free, 3:2 display, more storage, a more powerful processor, Thunderbolt 4 support, a fantastic keyboard and touchpad, and a thinner and lighter chassis. The 14c has a better webcam, better audio, and a nicer-looking chassis, but I think it’s still in a lower tier.

Those who are really wed to the $659 list price might also consider Lenovo’s Flex 5 Chromebook. Its Core i3 SKU is currently listed at $564.99. This device has an equally sturdy build to the 14c and performs just as well, but it’s still much lighter and has a keyboard and touchpad that I much prefer. It’s more of a toss-up between these two, a fact which ultimately showcases how great of a deal the Spin 713 is.

With all that said, I like what HP has done here. It’s made a device that looks and feels much nicer than all kinds of other devices you’ll encounter in the upper echelons of the Chromebook market. I like that the camera, microphones, and speakers — often neglected in laptops across the board — have clearly gotten significant investment. I think the 14c is only a few tweaks away from being a great laptop — but those are important tweaks, and it’s not quite there yet. I don’t think it offers a better-value package than other Chromebooks you can buy. There are just too many things that competitors do better.

Don’t Worry. Bitcoin & Crypto May Be Down, But Global Adoption Is Still …

AirTags are dangerous — here’s how Apple could fix them

3 reasons the update is so controversial