OnePlus has changed a lot. The brand originally started out by releasing a single flagship phone a year sold at a substantially lower price to its more established competitors. Lately that’s less true. It now has multiple flagship smartphones, like the OnePlus 9 and 9 Pro that are priced similarly to rivals from Samsung, and it also offers a lineup of around half a dozen mid-range and affordable smartphones under its Nord brand from its UK store.

At just £299 (€349) the OnePlus Nord CE 2 is about as affordable as the lineup gets in Europe. (The company says it’s not releasing this specific model in the US, where OnePlus sells a different lineup of Nord phones). The Nord CE 2 is pitched as a step down version of last year’s Nord 2, where the “CE” in its name stands for “Core Edition.” In other words, it’s a device focussed on the core essentials of a modern smartphone. That means good battery life, fast charging, a fast refresh-rate display, and good-enough cameras. There’s also a headphone jack. Bliss.

There’s another change that’s been happening at OnePlus over the years. It’s been growing ever closer to Oppo, another brand operated by parent company BBK Electronics. The result is that the OnePlus Nord CE 2 feels more like an Oppo phone than any other OnePlus device I’ve used. And yet, it also feels like the truest continuation of OnePlus’ original spirit: offering great performance at an affordable price point. 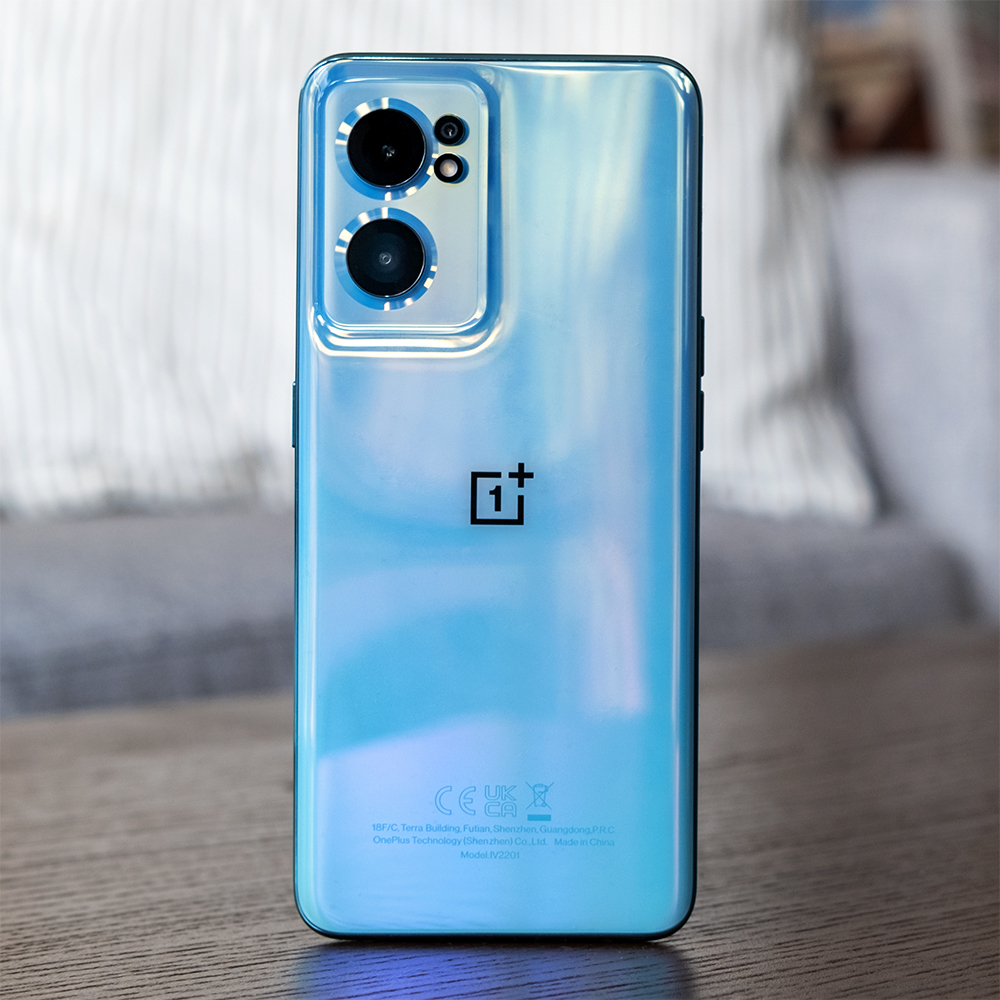 OnePlus has always had a close relationship with its sister brand Oppo, but historically there’s been separation between the two, such as different branding for their similar fast-charging technologies. But with the OnePlus Nord CE 2 these differences have all but disappeared. Its fast-charging technology is now branded as SuperVOOC, the same as Oppo, and the whole device appears to be a slightly tweaked and rebranded Oppo Reno7. It’s probably not a coincidence that this device follows reports that OnePlus is now effectively an Oppo sub-brand.

Does this matter? Not really. I don’t care what branding my phone’s fast-charging uses (OnePlus tells me the phone should still work with any OnePlus-branded Warp chargers you’ve got lying around) and nor do I mind if this device has technically already been released under a different name. It doesn’t change anything about the device in my hands.

The only major OnePlus feature I wish had made the cut is the company’s traditional alert slider on the side of the phone, to let you easily put the phone into silent or vibrate modes. This slider was also missing from last year’s Nord CE, so it’s not entirely a surprise, but I once again missed it during my time with the Nord CE 2.

Branding is less important than the specs you actually get, and on that front the OnePlus Nord CE 2 delivers. It’s got a nice and bright 6.43-inch 1080p OLED display with a smooth 90Hz refresh rate, a long-lasting 4,500mAh battery that can be charged at a speedy 65W with a charger in the box, 5G support, and a headphone jack. It’s available in blue or gray.

The overall construction of the phone feels lower tier than the specs it contains. Although its screen is Gorilla Glass 5, it’s got a plastic back and a plastic frame, and generally doesn’t have a premium feel. But on the plus side, it’s thin and light enough to disappear into a relatively slim pocket. There’s also no official IP rating for dust and water resistance, although like previous OnePlus phones you’ll probably still be fine using the phone in light rain.

Internally the Nord CE 2 is powered by a MediaTek Dimensity 900 processor, which in Europe is paired with 8GB of RAM and 128GB of internal storage (expandable with up to 1TB of microSD storage), both generous for this price point. Not using a chip from more popular manufacturer Qualcomm means you lose out on features like high-quality aptX Bluetooth streaming, but overall performance is otherwise consistent with what you’d expect from a phone at this price point. In other words, apps are generally smooth and slick, but I noticed some stuttering when I quickly switched between them.

Battery life is good, and charging is fast

Most importantly, MediaTek’s processor is able to keep up with the phone’s 90Hz display, which like most OLED panels is also nice and colorful. My unit looked a little too blue out of the box, but I was able to adjust its color temperature in its settings. Sound is a more basic affair, with a single downward-facing mono speaker. It gets plenty loud, but doing so quickly distorts the sound of whatever you’re playing. Your music deserves better, but I think it’s fine for listening to a podcast while you cook (my partner, a podcast producer, disagrees).

The Nord CE 2’s battery life is great. I never put the phone on to charge at the end of the evening with less than 40 percent of battery remaining, and I averaged a little over 7 hours of screen-on time between charges. Charging from zero using the included 65W fast charger got me to 21 percent charge in just five minutes, which is remarkable for an affordable handset like this. It hit 57 percent in 15 minutes, and was basically fully charged (97 percent) in 35 minutes. You need to use the correct Oppo or OnePlus charger and cable to get these speeds, so it’s good to get one included in the box.

Aside from its cheaper-feeling construction, the single biggest downgrade with the OnePlus Nord CE 2 compared to the Nord 2 or a OnePlus flagship is its cameras. On paper, things look ok. The Nord CE 2 has a triple rear camera consisting of a main 64-megapixel sensor, an 8-megapixel ultrawide, and a 2-megapixel macro. Around front, there’s a 16-megapixel selfie camera. (If you’re curious, this is the only major difference I could spot between the OnePlus Nord CE 2 and the Oppo Reno7, which has a 32-megapixel selfie camera.)

Give this camera system enough light, like when you’re outside in the daytime, and like most modern smartphones it’ll do an excellent job. Objects are detailed, colors are accurate, and the overall system is nice and responsive. I even like how the software handles faces. It doesn’t have that over-brightened look that previous Nord phones have suffered with.

But even when using binning techniques, which reduces images down to 16-megapixels by default, the OnePlus Nord CE 2 quickly loses detail in lower light. Rather than letting things get grainy, OnePlus’s software tries to smooth things over where possible, which can give faces that over-smooth plastic-y look. Look at the low-light photo of me above and you’ll see all the definition from my stubble has disappeared. At least it doesn’t look overly sharpened and processed.

Unsurprisingly the 8-megapixel ultrawide sensor is even lower quality, and struggles with detail even in bright light. The 2-megapixel macro just about lets you focus on close-up objects, but it’s so low resolution I didn’t love any of the shots it produced. I’ll happily take it over a completely gimmicky monochrome sensor, but it can’t match the genuine utility of something like a telephoto camera.

I’ve already mentioned the blurring lines between the OnePlus and Oppo brands when it comes to their fast-charging brands, but the highest-profile example is in their software. OnePlus has announced it’s merging its own OxygenOS Android software, with Oppo’s ColorOS, and last year’s Nord 2 reviewer’s guide specifically mentioned that its OxygenOS software was based on ColorOS 11.3. From what I can tell, the Nord CE 2’s software is similar, although its reviewers’ guide doesn’t mention ColorOS, and I was unable to get a clear answer from the company about what underlying codebase the Nord CE 2 is using.

Again, none of this matters much in practice. In day-to-day usage, the OxygenOS-branded software does a decent job of offering a flexible operating system that doesn’t get in the way. If you liked OnePlus’s approach to software before, then you’ll probably like it on the Nord CE 2. However, it’s a shame that the phone has shipped with Android 11 rather than the newer Android 12, since this means the two years of promised Android updates are likely to only bring it to Android 13. As well as two years of Android updates, you also get three years of security updates, though OnePlus isn’t committing to how often these will be. That’s not as good as the three years of OS updates HMD promised for the £299 X20, the up to four years of updates Samsung now offers across its Galaxy devices, or the five years (and counting) Apple has provided for the original iPhone SE from 2016.

The OnePlus Nord CE 2 is the most Oppo-like OnePlus phone I’ve personally used. But at £300(€349), it’s hard to fault. It feels fast and responsive in everyday use, its screen is smooth and vibrant, its battery easily lasts over a day, and it charges ridiculously quickly when it runs dry. The big compromises here are the phone’s overall build quality, which verges on feeling a little cheap and plastic-y, and a set of cameras that struggle to take decent shots away from bright daylight.

A lot has been written about how OnePlus has moved away from its roots in recent years and is no longer focused on offering flagship smartphones at a fraction of the price of its competitors. But with the Nord CE 2, it feels like it’s returned to this original promise. More than its recent flagships, the OnePlus Nord CE 2 feels like a true continuation of the OnePlus spirit of old. It’s just ironic that it’s done so in a device that feels like an Oppo phone.

Photography by Jon Porter / The Verge

How Netflix’s ‘Texas Chainsaw Massacre’ needed to “earn the Massacre”

‘All of Us Are Dead’ Netflix release date, time, cast, and…