Save $5 at Amazon, Walmart

Deal pricing and availability subject to change after time of publication.

RESTOCK ALERT: The 20th Anniversary Special Edition Xbox controller is back in stock at Amazon and Walmart as of Jan. 26. Plus, both retailers have it on sale for $64.99 (normally $69.99) — a $5 savings and its lowest price to date.

Microsoft celebrated the 20th anniversary of the Xbox last November with the launch of a special-edition wireless controller, which promptly sold out and stayed that way for weeks. It was so difficult to find during the holiday season that we started to think it was just a one-and-done release that would never see the light of day again, except maybe in rare appearances on resale sites.

Fortunately, we were wrong: As of Jan. 26, Amazon and Walmart had the 20th Anniversary Special Edition Xbox controller back in stock with a rare $5 discount. (It typically retails for $69.99, but you’ll pay just $64.99 — that’s its lowest price to date.) Whether you’re chasing a rad Valentine’s Day gift for your Player Two or just shopping for your personal collection, now’s the time to buy.

Inspired by the original Xbox Debug kit from the early 2000s, the controller features a translucent black finish with silver internals and lime green accents. Aesthetics aside, it works exactly like any other modern Xbox gamepad you’ve used before. There’s a dedicated Share button for capturing clips, plus a hybrid D-pad, texturized grips, and a 3.5mm jack for plugging in your headset.

Speaking of: Microsoft released a matching 20th Anniversary Edition headset alongside this controller last fall, which also happens to be back up for grabs at the time of writing (though it’s still full price). Complete the set and grab one while you still can from Amazon or Walmart for $69.99. 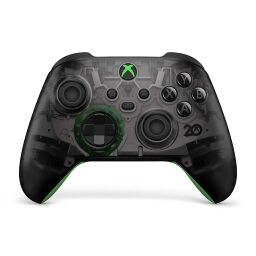 5 Signs of Burnout at Work

Microsoft finally admits Xbox One sales were less than half…

The Xbox Series X is currently available at Walmart

The ultimate tech survival kit for any emergency