If you live in a loud city, noise-canceling headphones are a must. I live in New York, arguably the loudest city in America, and I recently tested out the Sennheiser PXC 550-II headphones to see if they could actually block out the hustle and bustle of NYC. *Spoiler: They could.*

Normally when I walk to the gym, I carry a Hydro Flask that makes the most annoying sound as ice hits the metal sides.

It actually makes me cringe to hear it.

But when I wore the Sennheiser headphones, the noise cancellation completely blocked it out and I got to escape this dreaded sound. Unfortunately, everyone I passed still had to hear it, but maybe they should invest in a good pair of noise-canceling headphones.

Noise cancellation and sound quality are where the Sennheiser PXC 550-II headphones shine, and overall I loved these headphones — minus their outdoor call quality, which I’ll touch more on later. And at $349.95, they fit in the same price range as other noise-canceling headphones with similar features and sound quality.

Noise cancellation that actually blocks out the sounds of NYC

I wore these headphones with ANC turned on and my music at about 75 percent volume level while standing on the R platform at Union Square (a super busy subway station that’s always full of street performers) and I didn’t even realize there was a musician on the platform with me. I pulled an ear cup off my head and was honestly surprised by how much noise I simply wasn’t hearing while wearing the headphones with noise cancellation turned on.

You can hear the difference as soon as you put these headphones on, and you don’t even have to be playing anything. When ANC is on, you can almost feel the seal getting to work as you fit the headphones snug to your head and instantly find a reprieve from outside noise. But even without noise cancellation, these headphones are really good at blocking sound. Sometimes I couldn’t even tell if I had ANC turned on or not while my music played.

You’ll find two noise cancellation settings on these headphones: max and user. Max is pretty self-explanatory. (It’s the most intense coverage.) User is based on settings you control in the Sennheiser app. You can customize your ANC to be adaptive, which is the standard, or anti-wind. And for those who are worried about safety, you can still hear necessary sounds, like car accidents or sirens, with any of the noise cancellation settings turned on.

The ear cushions are nice and soft, and create a good seal for noise cancellation.
Credit: Miller Kern/Mashable

There’s also a transparency mode for when you need to listen to someone talking, announcements, or any other quick sounds you might need to tune into. Instances where you might use this include listening to an announcement on a plane or subway or having a quick chat with coworkers in the office. To activate transparency mode, you double tap the right ear cup, and it will pause your audio and amplify surrounding sounds. I am not a fan of transparency mode in general, on any headphones, because I think it makes things sound weird. It really amplifies sounds like air conditioners and cars driving by, which I don’t love. I usually just pause my music if I need to listen, but transparency mode is a nice option if you regularly listen with ANC turned on because you don’t need to turn it off to hear clearly.

The sound quality is immersive, but max volume could be louder

Whenever I need to concentrate, I turn on the Westworld score. When I got to the track “Motion Picture Soundtrack,” I actually got chills from the way it sounded on the Sennheiser headphones. With ANC on and the volume cranked up, the song felt super immersive — like I was actually in a room surrounded by violins.

There were some songs that would be much better past the max volume, but my eardrums might be destroyed from listening at those decibels. It’s definitely a decent volume level; I just wish I could have turned it up a couple more notches. 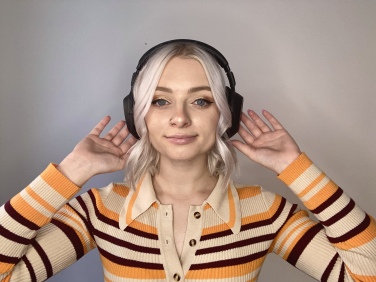 With some of my hair in front of the headphones, they don’t look too huge. 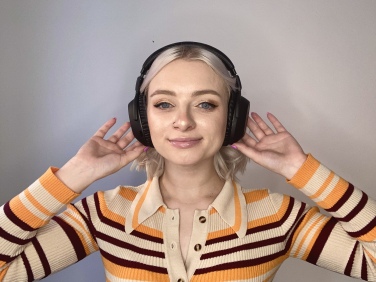 When my hair is pushed back, the headphones look massive on my head.

With the volume up and noise cancellation on, I couldn’t hear myself singing, which is amazing. I love to sing along to music, but I hate to listen to my own voice as I do it. And because I live in an apartment with thin walls, I feel bad blasting music out loud. With the headphones, my neighbors might hear the faint sound of me horribly singing “good 4 u,” but their walls won’t be shaking from the music.

Design is a little clunky

I loved a lot about the Sennheiser PXC 550-IIs, but one thing I didn’t love was the design of the headphones. When I put them on, I felt like a baby at a concert or someone at a NASCAR race. Granted, I do have a small head, but these things felt and looked huge on me. I had someone with a bigger head and bigger ears try them on and they even looked big on him. Though, he did say the Sennheisers sounded better than his Bose headphones.

The ear cups are a little bit too long for my liking. They have almost a teardrop shape rather than a round one, so the bottom padding goes down past my jawline. While the headphones do look a bit clunky, they have a nice finish and definitely don’t look cheap. 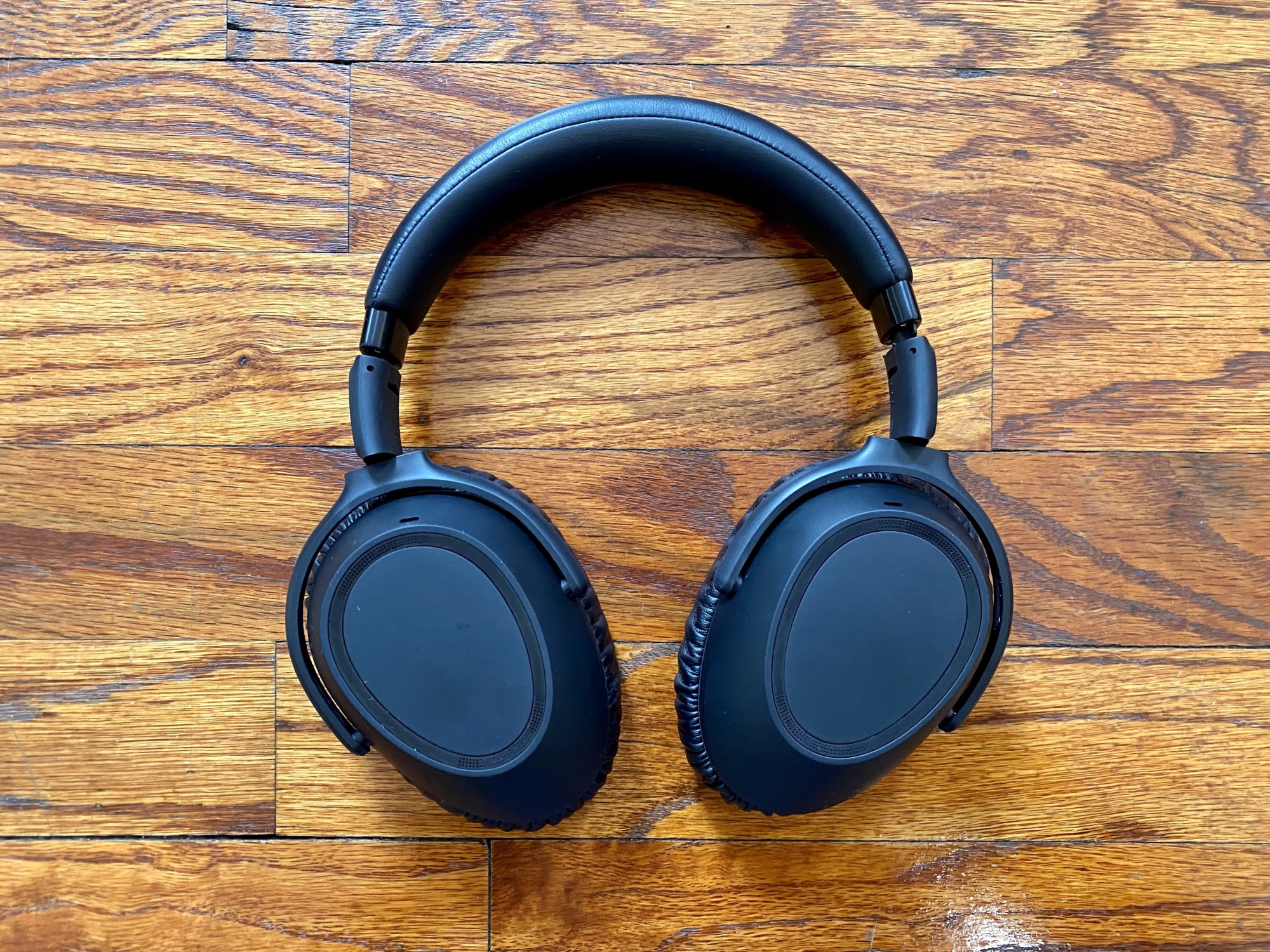 The ear cup shape felt too long on my head.
Credit: Miller Kern/Mashable

The padding in the ear cups is nice and cushiony. Like with any over-ear headphones, my head did start to feel squeezed after a while and I needed to take a break from wearing them, but you could definitely wear them comfortably on long flights or for most of the work day.

Controls are intuitive and convenient

One thing I really liked about the Sennheiser PXC 550-II headphones was the touch controls. All of the controls live in the right ear cup, and rather than having to remember how many taps you need for each control, they all have intuitive motions. Swipe forward to skip a song, swipe backward to go back a track, swipe up to increase volume, and swipe down to decrease volume. A single tap plays and pauses, which we’re all used to.

The headphone controls even have a feature where you can scrub through a track by doing a long, slow swipe on the ear cup. I didn’t use it that much, but it’s a neat feature that I could see being useful if you want to skip forward in a podcast or if you have a specific part of a song you want to listen to.

The best wireless headphones for every budget

The headphones are also easy to turn on and off — just rotate the ear cups and a voice will say “power on” or “power off.” They’re ready to pair via Bluetooth as soon as you turn them on, and they pair to multiple devices at once and switch between them effortlessly.

The first time I made a call on these, I was meeting my boyfriend for dinner. I called to let him know I had just gotten out of the subway station and to figure out where he was. His voice sounded super far away and I could hear my own voice echoing back. Plus, even though I was in noise-canceling mode, I could hear a ton of background noise on the call. I was able to make out what he said, but the muddiness was a huge thumbs down from me.

My second call using the Sennheiser PXC 550-II headphones was also outdoors, but I turned off ANC to see if that helped. It did not. My mom said she could barely hear me, which was my experience as well. I gave up and just held my phone to my ear.

I finally FaceTimed my mom while inside my apartment, and the sound quality was better. It sounded like she was on speakerphone, but directly in my ear. So, if you plan on making calls while wearing these headphones, do it inside.

The sound quality is worth the price

If you’re shopping for a good pair of noise-canceling headphones, you have to expect to drop a few hundred bucks. This pair costs $349.95 regularly, which is comparable to similar headphones from brands such as Sony and Bose. Plus, they’re often on sale at pretty middle-ground affordable prices.

Overall, I would buy the Sennheiser PXC 550-II headphones solely for their sound quality and noise-canceling functions. They’re awesome for music, but for making calls outside, I’d go with a different option.

How to Interpolate in Excel

Apple’s new M2-powered MacBook Air is cheaper than ever

Many of the James Webb telescope’s greatest discoveries…

Rings of Power’? 3 characters to watch

The Solar System could be littered with alien artifacts —…

5G UW and UC: Here’s what they stand for