Who is Andrew Tate? And why is the controversial figure…

The Yellowjackets score comes for you less than 90 seconds into the series.

After an unidentified girl falls to her death, the camera pans up her bloody body with a chilling musical cue. Part singing, part animalistic howl, this gliding note is as unsettling as the sight accompanying it. The closed captions call it “eerie music.” It is our literal crash course on the terror of Yellowjackets — a warning like the animal calls echoing through the trees.

Theodore Shapiro composed the background music for the Yellowjackets pilot. But it would be two years before the show received a series order and filmed further episodes, and he wasn’t able to continue. The job then went to Craig Wedren and Anna Waronker, who composed the music for Shrill and Republic of Sarah. Singer-songwriters in a noise band together, they had been itching to do something dark and weird.

10 ‘Yellowjackets’ theories keeping us up at night

“Teddy’s score was beautiful,” Wedren told Mashable in a Zoom interview. “But the minute I saw it, I was like, ‘Oh, we need to fuck this up.’ This needs to be like bloody fun, chaotic, messy — and beautiful and choral and female and all those things.”

Despite the plan to fuck up Shapiro’s template (in a good way), Waronker and Wedren kept the hair-raising vocal inspiration, performed in the pilot by Shapiro’s collaborator, Caroline Shaw.

“We got in there, sort of ignored the pilot template, and started creating this much more beastly thrill ride — sort of fusion of very modern horror — and then started blending in elements that Teddy had set up in the pilot. And [we] turned it into this grand freaky collaboration,” Wedren said. “Anna sings and I sing, and we had all these Caroline Shaw vocals and strands of Teddy’s pieces starting to blend in with this like big sonic cannibalism — kind of eating each other’s ideas.”

The result is a score that not only fucks up Shapiro’s template but expands and feeds on it.

The crash scene in episode 2 of “Yellowjackets” serves as the show’s “sonic palette.”
Credit: Showtime

Though they scored the episodes out of order, Waronker and Wedren made a blueprint of their own: The plane crash scene. Watch it again and listen to the music behind the sounds of screams, flames, and mechanical groans. We hear a new take on that glissing vocal, less of a howl and more of a moan, with notes of dread, optimism, and morbid curiosity. Thundering percussion pops in and out, dissonant at best and disquieting at worst. When Shauna and Jackie leave the plane, everything besides the vocals goes quiet — and then the voice starts to rattle.

“It seemed really important to set up the sonic palette for the show,” Wedren said. “You need an anchor. It’s fun to just go off, but it needed to always feel like you are in the world of this prismatic, swirling show.”

The Yellowjackets producers encouraged Waronker and Wedren to push boundaries, bringing in aspects of their musical training that weren’t always deemed fit for a background score. They created a musical palette of “weird strings” and harmonics — notes that never hit quite the right pitch and thereby unnerve the listener. Along with Shaw’s singing, the score is full of breathing — rasping, layered breaths, breathing as percussion, breathing played backward, manipulated, transformed — not to mention the screams. There’s something the composers refer to as “the witch sound.” Wedren squawked to imitate it and Waronker let out what did indeed sound like a chopped-up cackle.

“It was not that challenging, I have to say,” Waronker confessed of the process. “This was really really nice because we just were just really riffing off of each other.”

“Each of us sort of gives the other one courage that we might not otherwise have,” Wedren added. “We’re like ‘No no, do it! Make the screechy sound!'”

The second episode they scored was episode 6, “Saints,” in which Shauna’s attempted abortion is intercut with Lottie’s baptism. It’s a continuous cue starting with those “weird strings.” Listen to the first scene of Lottie and Laura Lee at the lake. It sounds like every instrument is playing a different piece. The breaths come in as we cut to Shauna and Tai in the woods, raspy and panicked this time. On a show with such a distinct soundtrack, pivotal scored scenes like this are the result of constant conscious decision-making.

“There’s usually a placeholder for everything by the time we’re all going through it,” Wedren said. “Some of it works, some of it doesn’t work, and we talk about those things. What does this scene need? What is or isn’t the temp music doing that it should and needs to be doing? What beats do we want to hit? And is it a song or is it scored?” 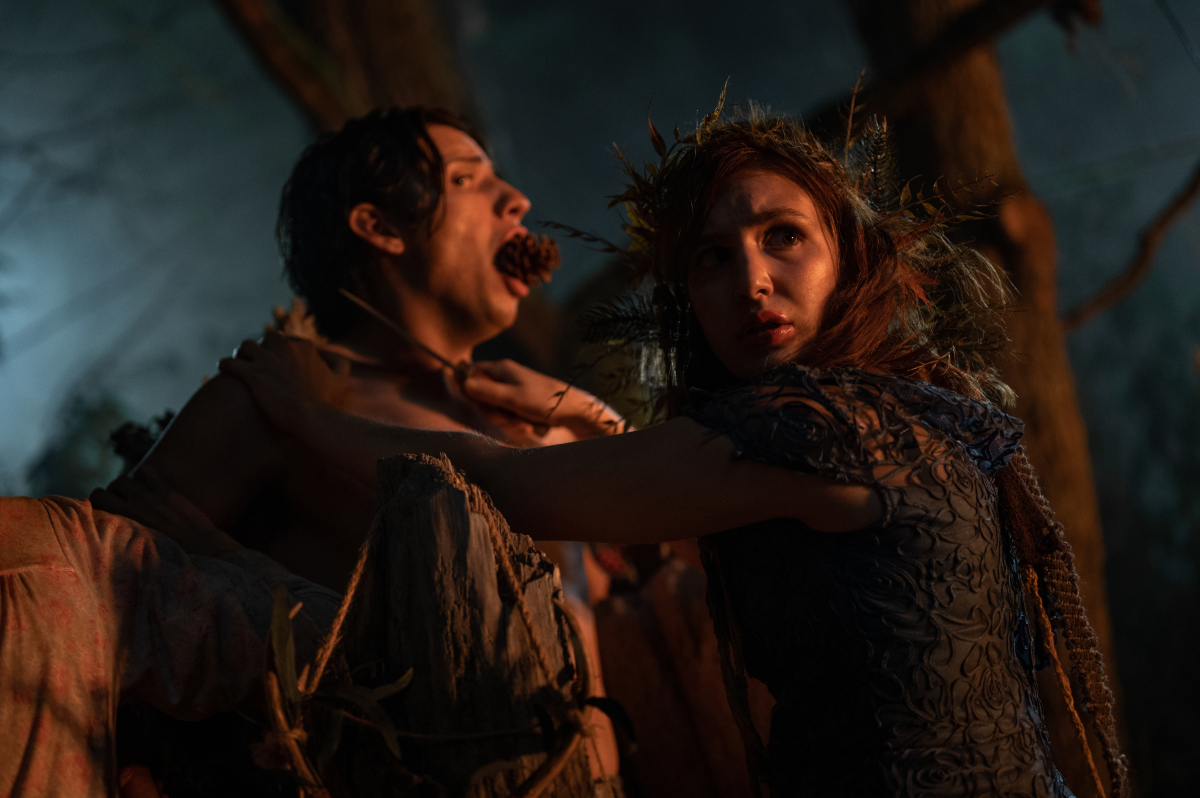 The climax of “Doomcoming” and arguably of “Yellowjackets” Season 1.
Credit: Showtime

Each episode presented challenges, especially on such a short timeline. But nothing could compare to the climax of episode 9, “Doomcoming,” arguably the climax of Season 1 itself. Wedren took a first stab (sorry) at the 15-minute musical cue while Waronker’s job was to maintain objectivity. After he took the first pass, she came in to “deconstruct the whole thing” and reignite the creative cycle for them both.

“When you have a piece that long, it’s a Jenga puzzle,” Wedren said. “So they’re like, ‘Can you just remove the middle section and replace it with something else?’ — you don’t know. The whole thing might fall down.”

The “Doomcoming” cue is a mashup of key signatures, tempos, and all the signature sounds of the Yellowjackets score. It’s also deeply jarring; the full background album isn’t available to stream yet. After listening to the “Doomcoming” cue on its own, Wedren isn’t sure it ever should be.

“We realized that when they’re running… it’s mayhem, and we needed to get like our rock-and-roll Carrie vibes in there,” Waronker said. “I had an idea of bringing in one of our more punk rock, like energy-wise, main title options for when they’re running, to just give it the spirit of the show and the main title and just make it fun. Obviously, it’s not fun, they’re chasing someone to murder them.”

“But that’s also the moment where they’re finally all free,” Wedren said.

That moment ends up being the only time we hear the show’s theme song, “No Return” within the Yellowjackets score. Wedren and Waronker were ready to pull from their library of other title songs and scrapped pieces for the end credits, but the showrunners (Ashley Lyle, Bart Nickerson, and Jonathan Lisco) made the final call.

‘Our dearest apologies’: ‘Yellowjackets’ showrunner answers our many, many finale questions

“And then we were like, ‘Dammit, they’re right again,'” Wedren laughed. “They’re just super creative and there’s an enormous amount of play and trust between the music side and the producers.” 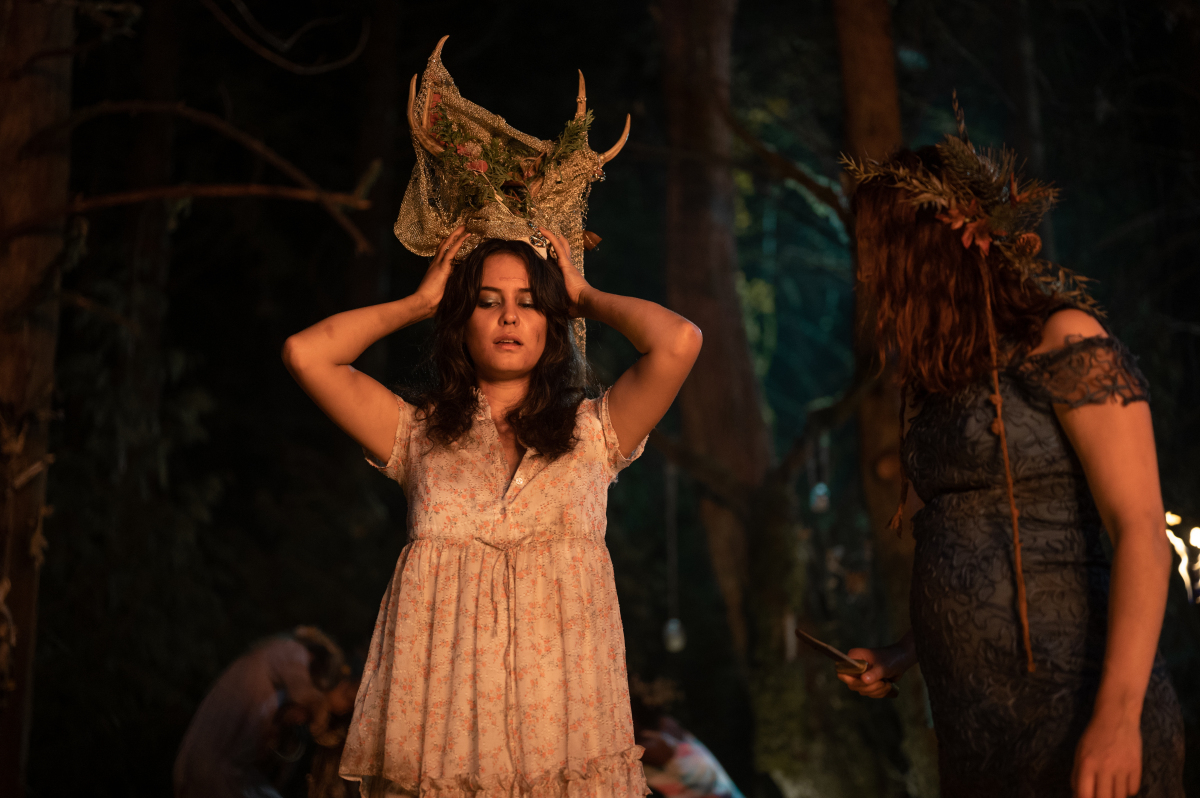 “I’m just going to put this out there,” Wedren said. “Hopefully, next season, we can write some songs.”

They’ve already proved their chops on the theme song (and its many iterations) and showed the immense range of voice work with the show’s vocals.

“I feel like with the theme and the sort of vocal-ly score that there’s a lot of fun and exploration to be had in that in-between land,” he said.

In-between land is effectively where our Yellowjackets live, and where Waronker and Wedren forged their score with Shapiro’s blueprint and their own new elements. Even when it’s disparate and uncanny, it’s undoubtedly the same score. As melodies and instrumentation grow abstract, there’s something holding it together, almost a song structure. Instead of hooks and choruses, there are screams, breaths, and an actual synth that sounds like a plane failing to take flight.

“We also know how to lock emotion to music,” Waronker said, speaking to their band history. “It was very cool to be able to string in some of those lyrical thoughts and song-based thoughts into these scenes.”

“It’s really important to both of us as songwriters and as songcraft obsessives to make sure that undergirding all of the craziness is something harmonically emotional,” Wedren said. “It’s gotta be catchy for the kids.”

Yellowjackets is now streaming on Showtime and via Amazon or Hulu.

What Is Sweatcoin and Does It Give You Real Money?

Who is Andrew Tate? And why is the controversial figure taking over TikTok?

PG&E’s criminal probation is ending, but the company…

USPS is doubling its initial order of electric mail delivery…